A CHP biogas system from a manure fermenting plant generates heat and power.

A CHP biogas system from a manure fermenting plant generates heat (for 3000 houses) and power (electricity).

The municipality of Zeewolde exists for only 26 years. In 2005 the municipality started developing an urban area called Polderwijk. The municipality consisted of app. 7.500 households in 2007. The Polderwijk is meant for 3.000 new houses, thereby increasing the total number of households by 50% in 2020. The realisation of the district heating grid in the Polderwijk started in 2007 and in that year the first houses and a church were connected. Now more than 1.000 houses are connected to the heating grid. The generation of renewable energy started at the beginning of 2009. Essent Local energy Solutions won the tender with a district heating scheme and combined
generation of heat and power on biogas produced by a dairy cattle farm. The distance between this farm and the Polderwijk is 5 km. In 2008 a pipeline of 5.5 km was
realised from farm to Polderwijk for transport of raw biogas to the CHP at the energy station of the Polderwijk. The CHP was commissioned at 28th of December 2008.
In 2009 and 2010 the production of renewable electricity and the utilisation of heat from the biogas CHP was almost equal to the energy consumption of households, church and schools in the Polderwijk. 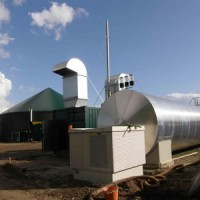