Warmth and CO2 from combustion of biogas from local anaerobic digestion is used to promote algae growth. Harvested algae is used as a nutritional supplement in salt lick blocks for cattle.

Behind the cowshed and the large digester at the farm of father Jan and son Douwe Zijlstra from Hallum, a small greenhouse with several basins has been built. These basins contain algae that are fed with the warmth and CO2 from biogas combustion. The original compulsion for building the algae facility in 2009 was a place to use the excess warmth from the combustion of biogas, which is legally required in order for the electricity generated to receive a renewable categorization, and hence a subsidy on the euro per kWh generation price. After researching several options, Douwe Zijlstra settled on an algae facility. He received a 2.2 million euro subsidy to build the facility, but the proposed construction partner dropped out during negotiation. To fill the gap, a three-party-consortium of experts formed Algae Food & Fuel to build and operate the algae plant. The new algae facility struggled through its first years, as it is very difficult to produce biodiesel from algae at a competitive economic rate: in the process of creating 1.2 kWh worth of algae-derived biofuel, 1 kWh of energy was required as an input. This poor balance, combined with other expenses in algae growth, put biofuel out of the question. Using the algae for foodstuffs was also considered, but the high cost of accreditation for health and safety was prohibitive. In the end, a niche market was found in selling the algae as a replacement for mineral nutritional supplements for salt licks for cattle. Now, the algae constitutes 1% by mass of salt licks, adding nutrients for the cattle that have an easier uptake and a more renewable source than the minerals they replaced.

The algae plant was spurred by a legislative decision that in order for renewable electricity to come from a biogas engine, the warmth must also be utilized somehow. With the renewable energy subsidy, 0.12-0.15 euro per kWh, plus the normal sale value for a small electricity producer, 0.05 euro per kWh, the farmer decided to build an anaerobic digester in 2004. The product of the algae plant is subjected to control by its end use. So, to be used as food for humans, the regulations were too demanding in time and money, whereas the regulations for livestock feed were relatively lax, so the choice was made to sell the algae as nutrients for animals.

Early on, the decision was made by Algae Food & Fuel to be on the Hallum farm rather than in an industrial terrain. The advantage of a farm site is that farmers are used to working within a system that operates continuously, whereas in an industrial terrain, such as the Maasvlakte, management would need 3 shifts of people to ensure the operation runs 24 hours - 7 days a week and 365 days a year. Furthermore, farmers are adapted to making a living from marginal profits, unlike biotech enterprises that are expected to pay back investments in a few years. Farmers are also flexible. When it became apparent that it would not be possible to make bio-fuel from the algae, they just shifted to making algae-salt blocks for cows. Such a change of strategy could have been more difficult if the project was a biotech research into the production of bio-fuel from algae, funded by an investor. Subsequently, the algae are harvested once a day, like a cow, so the farmer feels very familiar with the process.

Challenges that the project must overcome

The algae production facility experienced several problems during its start up. Economically, finding a market for the finished product was troublesome, but eventually overcome by finding a niche market with a local producer of salt licks. Technically, the process of going from algae in the water to a finished, dried product required a great deal of experimentation. The final process design includes a patented flocculator that increases the concentration of algae before being put through a centrifuge. Ecologically, not all of the original ambitions were met. The use of the digestate as a feed for the algae was eventually stopped. Instead, the water that the algae are grown in is recirculated in the system, with a small amount of input of raw rainwater and a small amount of outlet to avoid the build-up of salts. The reason for abandoning the use of digestate was that the digestate quality and composition is highly variable, the contents of which contaminate the final algae product, and the high turbidity of the digestate decreased the amount of light penetration into the water for algae growth, even when applied in low dilutions. The result is beneficial for the farmer, who applies the digestate to his fields as a fertilizer substitute. It does, however, mean that the algae growth in the ponds is dependent upon the use of artificial fertilizer additives for nitrogen and phosphorus. In terms of vulnerability, the system has proven to be resilient. Part of the resiliency is due to the use of naturally occurring algae rather than a specific lab strain, which would not survive in open raceways. A potential vulnerability is poisoning of the algae by carbon monoxide (rather than carbon dioxide) from the exhaust of the biogas engine. The problem is avoided by having a carbon monoxide detector on the engine itself, with an automatic stop when carbon monoxide is detected. 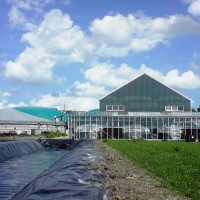