Early example of clever connecting available flows of energy to resources and literally housing the laborers.

Wind is converted into a revolving movement. The first technical part involved in that process are the wings of the windmill. In most cases, the rotor is equipped with 4 wings with a diameter of 25 meters in average. That is equivalent to a surface area of roughly 4 x 25 m2= 100 m2. The power that is generated by a highly developed windmill of that size can be estimated with the empirical formula:
n [HP}= A(wing) x v(wind)^3 / 1250;
Assuming a wind with 4 bft (7 m/s), the result is approximately 30 HP. But only 50% of that power can be used for the technical process, because of losses due to friction (15 HP or 11,2kW).
Every 6.5 m2 of wing surface generate 1 HP or 0.745kW.
The rotation of the horizontal shaft is deflected downwards on a vertical axle.
Additional gears are used to increase the speed of the rotation and connect the  drive shafts to power the machines. That can be grindstones for different crops or devices to transport water to higher gounds.
The buildings that support the rotor do not only house the mechanical installation but also accomodations for the windsmith, his family and the staff, especially in pumping mills because of the absence of dust.
The maintenace of the space surronding the mill, called the mills biotope, is one of the duties of the millsmith. It has to be kept free of trees and bushes that would deflect the fee airflow towards the wings. As a rule of thumb, no obstacles highter than one meter should be found in a circle of 100m arround the mill.

The history of wind power goes back a long way. Sailing ships have been using wind power for at least 5,500 years. Architects used wind-driven natural ventilation in buildings starting around the same time. The earliest reference to a windmill in the history of wind power was in the 1st century AD. It was used to power a pipe organ. Windmills were further developed to automate the tasks of grain-grinding and water-pumping.The earliest design was the vertical axis system. It was developed in Persia around 500-900 A.D. Grain grinding was the first recorded windmill application. A grinding stone was affixed to the vertical shaft to grind wheat and other grains. The mill machinery was usually enclosed in a building. China is often claimed as the birthplace of the windmill in the history of wind power - however the earliest documentation of a Chinese windmill was in 1219 A.D. This was well after the Persian windmill. The first windmills to appear in Western Europe's history of wind power were of the horizontal-axis configuration. The reason for the sudden evolution from the vertical-axis Persian design is unknown. It is suspected that the European water wheel served as a technical model for the early European windmill. These tower mills used wooden cog-and-ring gears to translate the motion of the horizontal shaft to vertical movement to turn a grindstone. As early as 1390, the Dutch set out to refine the tower mill design. The Dutch essentially affixed the standardmill design to the top of a multi-story tower.The tower was designed with separate floors devoted to grinding grain, removing chaff, storing grain, and living quarters for the windsmith and his family. These early windmills had to be oriented into the wind manually. This was done by pushing a large lever at the back of the mill. Optimizing windmill energy, and protecting the mill from damage during storms, were the windsmith's primary jobs. The process of perfecting the windmill took some 500 years. By the 19th century windmills had all the major features crucial to the performance of modern wind turbine blades. 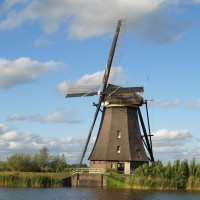