Close life cycle in the west of Kerkrade

Reuse a vacant place to produce food and renewable energy for local autarky.

Parkstad area which is in the south of Netherlands is suffering shrinking from last century like other typical old energy-based cities after coal resources are used up. Many negative consequences of Parkstad are gradually exposed in social, energy and food, three aspects. Social problem: shrinking population and vacant buildings, facilities.People started to move out of Parkstad area seeking more opportunities for jobs after mine factories were closed. It caused less and less people living in Parkstad. As the population loss, buildings and utilities of Parkstad which used to serving local people are becoming vacant now. Why does my research respond to social problem? Because social problem is the main reason leading to Parkstad decline. So my research whose purpose is to active local area is unavoidable to face social problem. Energy crisis problem which is not only existed in Parkstad area but also in the worldwide. Today most of energy in the world is provided by fossil fuels such as coal, oil and natural gas. These energy sources will be depleted in 50 – 80 years (Sergey S. Fedatsenka, 2014). At the same time, the combustion of these fossil fuels generates CO2, CO, SO2, particals... which pollute the environment badly.  Urban food supplied by rural area is a normal pattern in all the cities including Parkstad. Even though it is not a serious problem, but long distance transportation causes food cost increasing. If cities could supply food for their own citizens, it would be more economic efficient.

Jian Rui Why global energy crisis and urban food supply pattern become my research questions? Because these two problems are hot and practical topic. I like my research not only focusing on seeking methods to active Parkstad but also contributing to energy and food problems. The next level of energy crisis and urban food supply pattern is that what kind of clean energy can replace limited fossil fuels and how to realize urban food self-supply. After the analysis of social, energy and food problems, my fascination is based on these topics, that mainly researches on 1. how to promote Parkstad? 2. How to use renewable energy? 3. How to close local lifecycle to realize food and energy self-supply in local area.
creative commons 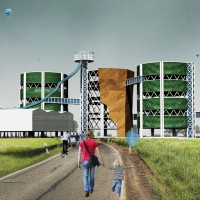