The goal of the project for the city of Chicago is to create a loop returning clean water to Lake Michigan. Waste water will be cleaned through green infrastructures along the city’s wide boulevards.

Growing Water envisions Chicago as a model for recycling and thus increasing its water supply, to be accomplished by creating fifty “eco-boulevards” sited democratically throughout the city. Essentially, the eco-boulevards would be long strips of publicly owned land transformed from gray infrastructure (roadways and sidewalks) to restored green infrastructure. Green infrastructure is any network of open spaces and conservation land — parks, wetlands, preserves, bioconduits and native landscapes — that naturally manages stormwater and improves water quality.

Nowadays Chicagoans routinely discard, literally flush down the drain, more than one billion gallons of fresh water (extracted from Lake Michigan) per day. This is water that never replenishes the Great Lakes basin; as if it had no value, it is treated and sent via the reversed Chicago River into the Mississippi and on to the Gulf.

Over the centuries, the city of Chicago has a tradition in dealing with water. The Chicago River: In 1892, ground was broken for the 28-mile-long Chicago Drainage Canal (also known as the Sanitary and Ship Canal). Twenty-five-feet-deep and 306-feet-wide, it was larger than both the Suez and Panama canals. New machines to move earth were invented to complete the project, establishing what some called the “Chicago school of earth moving.” On January 2, 1900, Chicagoans awoke to discover that the flow of the Chicago River had been permanently reversed, making it the first river to flow away from its mouth. The Deep Tunnel: In the 1970s, a team of engineers sought to solve the city's persistent  flooding and water pollution. Their solution was one of the largest engineering schemes ever undertaken: a 109-mile-long system of huge underground tunnels that would intercept sewer and stormwater overflow and convey it to storage reservoirs and treatment plants, from where it would flow onward, over the subcontinental divide to the Mississippi. Today, the deep tunnel has a holding capacity of 15.6 billion gallons of wastewater. Boulevards and parks: In 1837, Chicago adopted the motto “Urbs in Horto,” or “city set in garden”; yet the city’s early growth was so rapid and widespread that little or no provision was made for public parks. In a later effort to fulfill the promise of the motto, several large public parks were built and connected to one another via green boulevards. In 1893, the system was dubbed the “Emerald Necklace.” Similar boulevard systems were later developed in Boston, Kansas City and Washington, D.C.

Growing Water's green-infrastructural eco-boulevards encourage community engagement in the conceptualization, design, planting and upkeep of greenway systems. Such infrastructure would radically increase the environmental health of the city by returning to its lake ecosystem the water extracted from it.

Challenges that the project must overcome

The project must overcome social, environmental, sustainable, economic and regional challenges. In a social context, the project would distribute the amenity of green space throughout the city, stitching together historically divided ethnic and economic enclaves. The new public spaces would be used for walking or biking trails, sports fields, and fishing and swimming holes. Additionally, planting beds would allow city residents to micro-farm organic fruits, vegetables and flowers. About environmental improvementS, Beyond producing a more sustainable water system and healthier natural environment, the project would reduce the urban heat island effect, increase organic filtration of air-borne pollutants and carbon dioxide, filter pollutants and heavy metals from rainwater, and increase biodiversity by adding to insect, invertebrate, bird and wildlife habitat. The project will also overcome a challenge a sustainable challenge, since renewable energy stations would power the eco-boulevards. These would be prominently positioned within and at the ends of the boulevards (and on small peninsulas in Lake Michigan). Power could be harnessed from the sun, wind, water, solid biomass and geothermal lake energy. About economic, on a local level, the fingers of open space — the eco-boulevards — would raise adjacent land values significantly, especially in economically depressed areas. A steady, sustainable and safe water supply would allow the city to achieve a level of economic growth that other, less water-endowed cities would be unable to match. Considering a regionalscale, the eco-boulevards would become social and economic attractors, lined with high-density spaces for living and working. Eco-boulevards would typically extend beyond the western edge of Chicago, to the subcontinental divide, where they would be marked by “terminal parks.” These large green spaces would be surrounded by residential and work complexes for suburbanites, who, as water becomes a more expensive and contested resource, would likely seek to move back to the east side of the subcontinental divide.

Currently, UrbanLab has partnered with the City of Chicago to continue to research, design and develop aspects of the eco-boulevard project. With the Chicago Department of Transportation, UrbanLab is developing a series of best management practices (“BMPs” to water management specialists).

Advice for future developments to futher develop the trend

The Growing Water project envisions how Chicago might become an model for addressing urban water scarcity and pollution. It can be applied in every high populated city with big boulevard facing a big lake (there are several only in the US). With small changes, the same project can also be applied in different cities facing other water bodies.  The project assumes that in the near future, clean water will be our most valuable resource: the new oil.

The goal is to create a loop returning clean water to Lake Michigan Credit: UrbanLab http://www.urbanlab.com/ 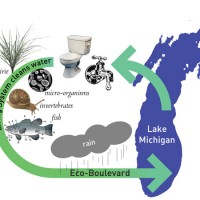