Hotel rooms that made use of abandoned houses and existing facilities in the Transvaal Neighborhood.

Hotel Transvaal is located in the Transvaal district in the Hague. The hotel rooms are scattered across the district in houses due for demolition, in unsold newly built houses, in peoples homes or in future also in temporary facilities on the wasteland areas. When the houses are demolished, let or sold, we relocate the hotel rooms. Hotel Tansvaal closed on October, 16th 2008.

Instead of "writing off" this transition period, mobile office OpTrek commissioned architectural firm RAL2005 (Jan Konings and Duran Doepel) to design the concept of Hotel Transvaal as a means of revaluing districts during their transformation process. Hotel Transvaal avails itself of the surplus of empty locations in the area. Therefore its rooms are not situated in one building, but spread all over the neighbourhood. The streets are literally the hallways of the hotel. The local facilities are the facilities of the hotel. The district is the hotel.
Hotel Transvaal cooperates with local residents, neighbourhood organizations and local entrepreneurs. This gives the hotel a wide range of facilities. Turkish, Moroccan and Surinam restaurants, fresh bakeries, beauty salons, an ayurvedic massage parlour, bars with live music, hairdressers and several internet cafés. Most shops are open seven days a week, also during the evening. And all of that within walking distance from the hotel rooms.

With Hotel Transvaal the initiators give their vision for a local and national reconstruction policy. The Transvaal district is not unique.
Urban renewal takes place all over the country. This may put an end to the decay, but it also means the end of local history and social structures. Hotel Transvaal fills the vacuum in the transition phase, by revaluing it, by seeking clues to link the past to the future and by showing that areas in transition really have potential.

The hotel rooms are designed and furnished in an exceptional manner by local shopkeepers and artists.
http://www.hoteltransvaal.com/
creative commons 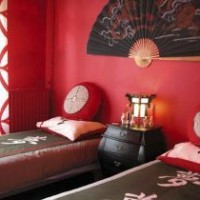