Electricity generated by using the energy from the vibrations created by walking people.

Electricity generated by using the energy from the vibrations created by people walking on the station's floor.

East Japan Railway Company (JR East) installed piezoelectric elements in the floors at ticket gates and other areas of Tokyo Station to test a system that generates power using the energy created by passengers passing through the gates. JR East expected a generating capacity of total 1,400kW/sec per day. The generated power was used to display the generating capacity, but, in the future, it will be used to run the automatic ticket gates and electronic display systems, according to the company.

Experiments on this "power generating floor" have been carried out since fiscal 2006. The company plans to increase the generating capacity of one passenger walking through the gate by about tenfold over the result achieved in 2007. Also, it aims to maintain a stable generating capacity throughout the test period. The test started Dec 10, 2008.

Japan, people stepping on the piezoelectric floor of a station http://earthfirst.com/wp-content/uploads/2008/12/japan-train-station-power.jpg 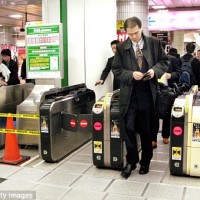