According to the Koran old bread may not be thrown in the garbage. Bread is holy, and must be given back to the earth.

In the Kolenkit, a neighbourhood in Amsterdam, the municipality placed special bread containers to stop Muslims from throwing their old bread on the street. The bread lured rats. Stadsdeel West publishes on their website that bread from these containers is processed to make animal feed. However, this bread is shipped to the incinerator with the regular garbage. The bread containers prove to be a smokescreen.

On display are thousands of pieces of bread – from the containers – and a prototype digester that turns bread into energy. 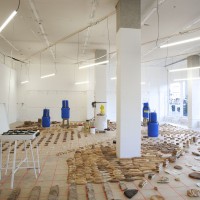