Plato uses a unique thermal process to strengthen softwood to the specifications of hardwood. In doing so, Plato is able to upgrade lower-quality wood into a higher-quality product. Their product is especially useful for use in window frames in the absence of overhangs, stakes, pilings, and other moisture-rich environments. The majority of Plato’s products are from Norwegian spruce, however they have also cultivated a market for West African Frake. Without their special thermal process, the West African Frake is unsuitable as a durable construction material, and was considered as waste in forestry harvests. Besides wood, the most important input into Plato’s process is thermal energy in the form of middle-pressure steam at 230-260 degrees Celsius. The steam comes from a natural gas co-generation plant operated by Nuon in the same industrial park. The extent to which the steam can be considered as a residual product of electricity production is not totally clear, but it is certain that Plato beneficially uses its proximity to the plant for an ecological connection.

Currently, five distinct process stages can be distinguished including the two effective heat treatment stages: (1) pre-drying stage in a conventional industrial wood kiln to a moisture content of 14-18%; (2) hydro-thermolysis stage in a stainless steel reactor, the timber is heated to 150°C- 180°C in an aqueous environment at superatmospheric pressure (including saturated steam as the heating medium); (3) drying stage in a conventional industrial wood kiln using common procedures to a moisture content of 8-9%; (4) curing stage in a special stainless steel curing kiln, the timber is heated once again to 150°C-190°C, but now under dry and atmospheric conditions; and (5) conditioning stage, the moisture content of the timber is elevated to a level, which is necessary for manufacturing (4-6%). Conditioning is done in the same conventional industrial wood kiln as the drying stage, including the use of saturated steam to increase the moisture content of the treated timber. In the hydro-thermolysis stage saturated steam is used as the heating medium to increase the temperature of the timber. Cooling down is accomplished by flashing the reactor (a quick but controlled release of the pressure) to atmospheric conditions followed by spraying the inner site of the reactor with cold water. In the curing stage the timber is heated with hot air, generated by heaters and circulated with ventilators. Above 110°C superheated steam or nitrogen is add as a sheltering gas to exclude oxygen and to prevent oxidation reactions. As can be concluded from the description of the Plato technology, no chemicals are used. Small quantities of organic compounds in the liquid waste steam extracted during hydro-thermolysis (condensate), drying (wood moisture) and curing (wood moisture) are dealt within water treatment facilities. Gaseous compounds extracted from the curing oven are treated in a scrubber system to condense water from the gas stream – including any organic matter and extractives from wood – and to minimise odour.

Without Plato, softwood is not used in harsh conditions (sun and moisture). In the case of Frake wood from West Africa, it was a by-product of FSC certified forests that had no commercial application due to its poor durability. Frake was chosen from 350 different species that were in the forests but not yet commercialized because it fit with their process and there are sufficient quanities available.

The Plato process was developed by the Shell corporation at a time when they were involved with logging in South American. In 1988, the project ended and the patent was bought by the researcher, and the research team moved to Wageningen to start an industrial research and development spin-off. The name Plato was given by Shell, as they gave Greek god names to promising projects. The process promised “to make gold out silver” by overcoming challenges of previous thermal treatment processes thus transforming less-desirable softwood into durable and straight material. In 2001, the plant in Arnhem was opened.

The company went bankrupt in 2002. They restarted their business by shifting from a commodity service to customer satisfaction. They had to ask themselves who is really interested in the product and who is willing to pay extra for it. They are also helped by the fact that wood is now in a posiitive light. Since 2005, they have exported to Belgium, the UK market is growing, and they are slowly spreading outwards. As a part of focusing on customer satisfaction, Plato works directly with architects on limited-run, specialized treatments.

In a Life Cycle Assessment of Plato products (wooden poles and window frames) conducted in 1998 by the Institute for Applied Environmental Economics, the Plato products out-performed other alternatives, including concrete, PVC, chemically treated wood, and aluminum.

Plato has had some important projects that have received a lot of attention, which has helped the awareness of their product. Most importantly, they offer an alternative solution to a problem. Their softwood can withstand sun and moisture without any chemicals. In this way, a niche has been established. Plato has also benefits from changing dynamics in the building industry. In the past, the building industry was completely top down, from importer to builder to client. Now there is some mixing, with clients who are aware of the environment. Clients often do their own research to source potential products, which then they communicate to their builder.

Plato Wood can be applied without a coating. The surface will be weathered in a natural way due to the influence of sun light, rain and wind. This does not affect the durability of the wood, but the wood surface will be grey after a while. During the first period of weathering the wood surface might be a bit spotty and dark coloured (especially when wet). This might be intensified through the adhesion of dirt and aerosols on the wood surface. It has been found that not having to apply coatings saves materials in the use phase of the product. 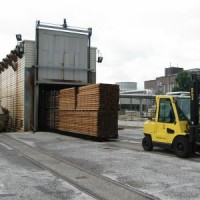