In a former industrial site in the city of Eindhoven, groundwater is extracted in order to produce energy for the buildings in the neighbourhood and to decontaminate the soil.

In the city of Eindhoven a sustainable urban redevelopment of the Strijp-S will be realized. Some of the buildings in Strijp-S are monuments with aesthetic and historical qualities and they will be maintained. In order to make the buildings meet the current standard for energy performance, a new solution called Sanergy was found. Sanergy is a closed system designed for energy production from groundwater circulation . This system consists of extraction and infiltration wells, allowing groundwater to be pumped. During this process, heat and cold are extracted from the groundwater. It will provide energy for the new and existing buildings in Strijp-S. The soil of the area has to be decontaminated because it was an industrial site. The Sanergy system accelerates the natural degradation of oil pollution. Sanergy will be a combination of renewable energy production and groundwater decontamination.

Strijp-S, in the city of Eindhoven, is a former industrial site of about 30 hectars that belonged to Philips Electronics NV.

Volker Wessels, the city of Eindhoven and philips joined forces in order to realize the sustainable urban redevelopment of the Strijp-S in Eindhoven. 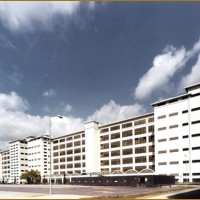