Actually, the traditional Colombian Handicraft is being affected by many economic and social phenomena that over time is leading to the disappearance of the “know how” and the typical products of the country. Traditional products are being modified and their main raw materials replaced by others that allow greater economic remuneration, but that has nothing to do with cultural or territorial evolution of each product.

This project is focused on rescuing artisanal production processes, with the focal point of the development of systemic models of production and relations with the territory and directly involve the community in the development of a regional economy that allows at the same time to maintain the tradition, improving the level of quality life of its inhabitants, the quality of water and the use of renewable energy resources and also generating economic and environmental benefits to the territory where such activities take place. The systemic model in the territory of Villa de Leyva, Colombia, is proposed, on four main handicraft production activities Ruana, Ceramic tiles, Besos de Novia and Chicha, where the current situation was analysed in order to compare the proposed production models and thus present the benefits that the systemic model would bring to the region development, to make this town an example to be followed at national level and a replicable model across the geography of the Colombian nation.

For the development of this project, were selected four products that represent completely the tradition of the centre of Colombia; two about typical gastronomy; La Chicha, a fermented beverage based on maize and Besos de novia, a biscuit brewed with a sponge cake covered with meringue. And two more about handicraft tradition, The Ruana, a square poncho made totally in sheep wool, and ceramic tiles, hand manufactured and unglazed clay tiles.  All from the Central region of Colombia, in the department of Boyacá, in Villa de Leyva town. A town of great historical importance throughout the development of Colombian culture right through the ages, from the first indigenous settlements, until the arrival of the Spaniards, the invasion and almost total destruction of existing cultures, the development of slavery of indigenous peoples and Africans who were brought into American territory, to the development of the republic and the creation of this adventure called Colombia.

All these historical phases were important in the development of these traditional activities, some as in the case of Chicha, a great religious component for indigenous peoples as it represented the mystical connection with their gods and beliefs, and others like Besos de Novia that became elements of religious tradition brought by the Spaniards into America.

In the artisan tradition, a strong mix between aboriginal tradition of development of ceramics and as with the arrival of the Spanish architecture, this is transformed and developed in a more technical way, transforming traditional production methods and indigenous products, but as in many cultural mixtures creating new representative elements of tradition thanks to this cultural permeabilization. Finally the Ruana, (poncho) made largely in America, with sheep’s wool or animal hair like alpaca, gets to convert from traditional native costume, cultural icon and identity of contemporary peasant, like that element found in most Colombian households and makes no distinction of race, socioeconomic status or creed, since all Colombian knows and respects it somehow. Maintaining these elements as identity icons of the country and this is part of what this project seeks to protect.

At the production level, every production process has essential raw materials for the production of manuals and culinary craft, without actually importing the source of these materials, the negative effect it may have on the environment and not just in the environment but health status, becoming an output, ignoring partial or completely the disintegration process and how it affects the ecosystem. The current state of production used by craftsmen in Villa de Leyva in the production processes of gastronomy products as Chicha, Besos de Novia and the crafts products like the Ruana and Ceramic tiles, for these four activities, the production process and the quality of its raw materials and the outputs generated are analysed, in order to measure and discover the important points where could make substantial changes in the production and in the relationship with the land and its materials. This generated four separate models (one for each activity) allowing to analysis their weaknesses to tackle these issues.

Developing a systemic model is an elaborated analysis process, which should take into account different factors to be able to generate a model that is verifiable and feasible. One of the most important aspects is not just about connecting activities in commercial mode, but are also significant apart the quantities of raw materials, the quality of these since each activity requires materials with some specific features and the ease of obtaining these, transport, collection and processing, which means that the designer has a good understanding of the processes, inputs, outputs and flows generated in each production activity, and a proper analysis of the territory where these activities are located. This implies that has to be a process of design, analysis and constant feedback, always looking for propose the possible model more feasible.

For the project, the systemic model is developed in two phases, the first analysed the various craft activities and the others activities than could be related to the artisans in the territory, this allowed tackle the problem from a holistic view, observing and taking into account the needs of the territory to stock of different raw materials and energy supplies for the development of all the productive activities, this served to give an idea of what are the current activities and which should be created to supply these needs completely . Once done, the proposed models were compared with the production model in which the different raw materials come from outside the territory, and only a portion (30 % of activities) develops in the territory. At the same time, the craft activities analysed was located in the territory map, where they developed, this to generated a more realistic model, due to the feedback generated by comparing the proposed relations with the ability and distribution of these on the map, so it can be seen that the proposed models were analysed not only by the possibility of relationships between their activities, but also the ease with which these relationships occur. Here’s how the location of the activities allowed in turn generate economic and infrastructure investment calculations, necessary also to see the possibility of the creation of the system and analyses the financial benefits.

After analysing the current production model, making emphasis on highlighting the problems faced and weaknesses, the problems that must be addressed are identified and once evidenced these give way to the generation of systemic model that seeks to address these problems always starting from a fully connectedactivity to the territory where it develops. To develop the model, was done in solving the following topics: Energy (electricity and gas). Water Quality. Materials needed for production (inputs). Products generated during the production process (Outputs).These four main topics in turn, were analysed from the territorial point of view, seeking to create a strong connection to the region and also to solve the problems in the territory or generated by these artisanal production processes. To this, the systemic production models were generated in two ways. Initially the activities independently, connecting with the activities that are related to each, and finally a macro systemic model was generated, covering all activities that were related to each of the systems, creating a model realizable territorially and can get replicate to new activities, which in turn can be added to the system.

Once the systemic production models were developed, the models for understanding the relationships are created. These models also allow discover new relationships that may be generated, in addition to extract for the two-dimensional plane the production process, eliminating the concept of linear production which goes step by step to obtain a product. In these models, all can be identified as a molecule where each parts structure the system, make it stronger and showing how all the relationships between activities are important to the overall system.

Also it allows analysing the different planes that exist in the systemic model; energy, water, inputs and outputs, which of these can supply other activities or which activities become connectors between an existing activity and the activity analysed. These “connectors” activities can become new activities that enrich the system, also, as discussed further below, the 4 molecules relations models generated will become the basis of a “macro” model of relationships that connects all the activities involved in the system. Analysed these models of relationships, was located on a map of the territory the various activities, where its location on the territory plays an important role for the realization of the final systems, once do this feedback, can be generated the final models, which take into account the economic, territorial feasibility and logistics of such operation.

The macro-system model is based on binding to a single set of the previous four models, proposing a macro system covering all craft activities and relationships, creating new connections between them and thus optimizing the production of the activities involved. The macro system model takes into account the location and logistical possibilities of creating different activities, the quality of the inputs and outputs for power generation and water treatment, in addition to existing and new activities in the territory, and in the end is totalized the benefits obtained by the activities and welfare, are generated internally by the same system. 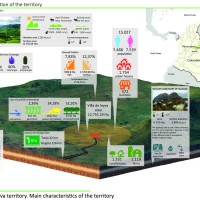