Solar evaporators tap into the city’s sewage, collecting and clarifying the black water.

Los Angeles Cleantech Corridor and Green District Competition was an open ideas competition sponsored by SCI-Arc and The Architect's Newspaper. Entrants were challenged to use the competition as a forum for provocative, even revolutionary, reconceptualizations of L.A.'s urban fabric. Constantin Boincean, Ralph Bertram, Aleksandra Danielakreinterprets were the winners of the competition with a project called Umbrella which reinterprets LA's existing infrastructure by implementing a point-based renewal strategy that will gradually transform the city grid into a greener and more attractive public space. Mushroom-like structures named solar evaporators tap into the city's sewage, collecting and clarifying the black water originating from the surrounding blocks. The clear water is distributed and released into the streets through a process of evaporation and condensation triggering a transformation into a network of lush, cultivated landscapes. Green webs spreading out from the evaporators generate incentives for new, sustainable developments. The central urban plazas become focal points for a gradual process of transformation that will affect the way people will see, use, and experience their city. 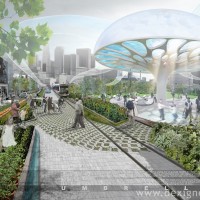