Industrial waste heat and CO2 are reused in greenhouse horticulture.

WarmCO2's core business is to create a symbiotic connection of heat and CO2 between the artificial fertilizer company Yara and local greenhouses.

The Yara Sluiskil site is Europe’s largest artificial fertilizer producer. The site has three ammonia plants, four CO2 plants, two nitric acid plants, two urea plants (one prilling and one granulation) and two nitrate granulation plants. Approximately 70 percent of its ammonia production on site is released as finished fertilizer products. The Yara factories produce a consistent 84 megawatts of heat and an annual 2,641,375 tons of CO2. WarmCO2 has installed a heat exchanging operation on their site to transport away the some of the hot water and CO2 to prospective greenhouses that are being tendered to move into the region. Warmco built and maintains the transportation infrastructure: an insulated hot water pipe, a return pipe (40*C), and a CO2 pipe. The maximum capacity for the system is 168 HA of greenhouses. At the moment, 24 HA are connected. As the infrastructure supporting greenhouses now includes transportation, warmth, and CO2, market initiatives to develop more greenhouses in the area include Biopark Terneuzen and Foodport Zeeland, which has attracted the attention of some growers.

Yara, the world's leading provider of mineral fertilizer, produces artificial fertilizer, the main active ingredient of which is fluid ammonia, a nitrogen additive for crops. Ammonia is synthesized in the Haber-Bosch process, which has methane, water, and electricity as its main inputs. The by-products are water, CO2, and large amounts of heat. Before the WarmCO2 infrastructure was built, all of the heat and CO2 from Yara was released into the environment. The regional authorities in the Province of Zeeland objected to the thermal load to the Ghent Terneuzen Canal, where Yara was dumping its waste heat. Simultaneously, nearby greenhouses operated their own micro-combined-heat-power nautral gas engines for creating heat and CO2.

The project has been more expensive than was predicted. In the construction phase, WarmCO2 had difficulty building their required infrastructure on Yara's territory. In complying with regulations and permitting, costs quickly accumulated. In operation, there have been some difficulties matching demand and supply. WarmCO2 benefits from the fact that they can extract from 10 different processes in Yara, so they are able to have consistant supply, but buffering and other factors have been troublesome. Furthermore, WarmCO2 predicted that they would receive more clients, but do to the financial crisis of 2008, fewer greenhouses located themselves in the region than was expected.

WarmCO2 installed their infrastructure on the edge of the Yara territory to pick up and transport the heat and CO2. They had to comply with noise and safety regulations. They also had to get permits for building the pipe lines.

With WarmCO2 gardeners have cheap, environmentally friendly heat and pure CO2 . The heat is always available and almost independent of energy prices. By participating in WarmCO2 gardeners to save 90 percent on their gas consumption, and are one step ahead of future advances in environmental regulations. WarmCO2 offers gardeners the essential combination of operational and financial advantage. The market they are trying to cultivate is an “ultra modern” greenhouse location that generates a locational advantage.

Zeeland Seaports, the managers of the harbor, initiated the project, and own 80% of the WarmCO2 company. Yara was the other initiator, and owns 20% of the company. Greenhouses that use WarmCO2 have a contract to receive warmth and CO2. The infrastructure stations for delivering the warmth and CO2 is owned by WarmCO2. WarmCO2 and Zeeland Seaports are trying to attract more greenhouses. Part of this effort is Biopark Terneuzen, an organization of difffernt actors trying to stimulate an ecological industrial park, which WarmCO2 would be a part of.

Due to the continuous nature of Yara's production process, the delivery of heat and CO2 is highly reliable. Yara reached by the cooling water of heat the greenhouse with a high temperature. More than enough to fund all conditions warmed to the desired temperature. Furthermore, the heat supply is detached from the price of fuel, so it is independent and stable. WarmCO2 has a list of points that it uses to attract existing greenhouses to use their service and to attract new greenhouses in the region. They claim the following benefits over using the conventional means: - Green label at your fingertips - Stay ahead of environmental requirements - Choice & Flexibility - Reliable heat - High purity CO2 - Transparent pricing - Professional partners - Attractive light for your company 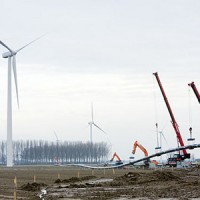