At This Vending Machine, Swapping is the New Buying

We’re used to putting money in a vending machine and instantly receiving consumable goods—a bag of chips, a soda, or even a new pair of headphones—in return. But what if vending machines became a fresh way to reuse, recycle, and trade with people in your community? That’s the vision of the Swap-O-Matic, a New York City-based vending machine project that wants to “shift culture away from an emphasis on unconscious consumption” by encouraging people to donate and receive used items for free.

To use the Swap-O-Matic, you register with an email address using the machine’s touchscreen interface. New traders start out with three swapping “credits.” Donating an item earns additional credits, which can be redeemed for anything else in the machine. The Swap-O-Matic operates on an honor system—no one is monitoring whether you’re actually putting a pair of earrings into the machine in order to get the cool Star Wars action figure your neighbor donated, a “flag system” prevents misuse.

Lina Fenequito, the primary creator and designer of the Swap-O-Matic, has long been an advocate of sustainable living and responsible consumption of resources. Fenequito writes on the Swap-o-Matic website that she remembers being dragged out of the local mall in tears by her mother who “would not let me buy the new brown loafers I thought I could not live without.”

Years later, while working with social-justice activists in low-income communities in North Carolina, Fenequito writes, she began to seriously reflect on the “ingrained mindset of a culture that has been ‘programmed’ to consume and buy blindly” without consideration of the social and ecological consequences. Fenequito deliberately chose the vending machine format as a way of playfully commenting on the our cultural addiction to “immediacy, instant gratification, and convenience.”

Since making its debut last year, the Swap-O-Matic has been housed in various locations across New York City—everywhere from the Parsons The New School for Design, where Fenequito earned her master’s degree and now teaches, to the Lower Eastside Girls’ Club. It currently sits at the Ample Hills Creamery, an all-natural ice cream shop in Brooklyn.Fenequito hopes to expand the project from the initial machine—after all, the message of recycling and reusing instead of always buying something new is one that resonates globally. 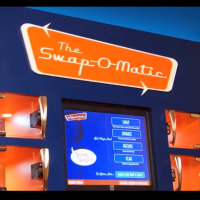