a house to accommodate humans, livestock and storage on the patch of land that supports its subsistence

The 'one roof farm house' is considered to be the oldest form of vernacular farm architecture. The building houses all functions to support the life of its inhabitants and the livestock. These houses grew in size and complexity with the societies and technologies.
The land surrounding the farmhouse remained the most important source to feed the animals and to grow the crops for human consumption. The local market could be used to sell the own production in exchange for things that could not be grown or produced with own resources.
These farms can be regarded as highly efficient, integrated systems that make the best possible use of their resources and can be seen as semi-autarcic. There is nearly no 'waste' produced, because cycles are locally closed.
Especially on the slopes of the central European low mountain ranges the spatial structure evolved in a resource efficient way.The program inside the building is arranged to maximize the use of warmth and to minimize heat loss. There are still examples of that type of farm to be found in France and Germany. The 'Schwarzwald' farm house can serve as a role model.

Agriculture involving domestication of plants and animals was developed at least 10,000 years ago. Animal-rearing has its origins in the transition of cultures to settled farming communities.
Goats and sheep were domesticated around 8000 BCE in Asia. Swine or pigs were domesticated by 7000 BCE in the Middle East and China. The earliest evidence of horse domestication dates to around 4000 BCE.
Although the enclosure of livestock in pastures and barns is a relatively new development in the history of agriculture especially in the colder climatic zones it was necessary to provide shelter to human and their animals. Therefore farmhouses were build to accommodate everything under one roof.
Through the history spaces for living, keeping the livestock or storage were separated and the complexity of the farmhouses increased. Nevertheless, everything took place under one (big) roof. 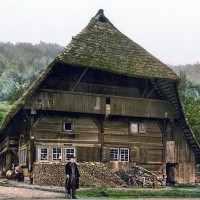