Following months of planning and development, the prototype, named the Orange ‘Sound Charge’ has been produced in conjunction with renewable energy experts at GotWind. The eco charging device uses an existing technology in a revolutionary way; by reversing the use of a product called Piezoelectric film, allowing people to charge their mobile phones whilst enjoying their favourite headline act at Glastonbury. Usually found in modern hi-fi speakers, an A4 panel of the modified film is housed inside a t-shirt which then acts much like an oversized microphone by ‘absorbing’ invisible sound pressure waves. These sound waves are converted via the compression of interlaced quartz crystals into an electrical charge, which is fed into an integral reservoir battery that in turn charges most makes and models of mobile phone. As the ‘device’ is worn, a steady charge is able to be dispensed into the phone via a simple interchangeable lead which fits most handsets. After a weekend at Glastonbury the Orange Sound Charge will almost certainly be in need of a good scrub, so the Piezoelectric film panel and electronics are all fully removable to enable you to stick it straight in the wash. The development team behind the device estimate that when used at the festival with sound levels of around 80dB (roughly the same as a busy street), the Orange Sound Charge will generate up to 6 watt hours (W/h) of power over the course of the weekend – enough to charge two standard mobile phones or one Smartphone. Of course festival goers will also be able to plug in their phone for a quick ‘top up’ charge whenever they need it. 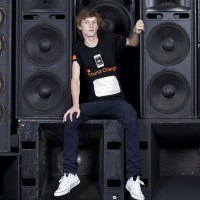